History of Canals in Bengal

Bengal is a riverine state. The most important part of this is the canal Network. From the very beginning, the canal played an important role in the commercial trade of Bengal. Besides, it had a great impact on the life of Bengal.

History of Canals in Bengal 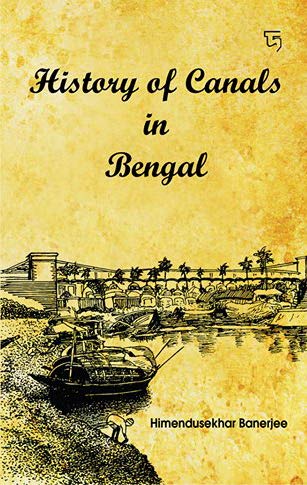 History of Canals In Bengal

This book is sold subject to the condition that it shall not by way of trade or otherwise, be lent, resold, hired out, circulated, and no reproduction in any form, in whole or in part (except for the brief quotations in critical articles or reviews) may be made without written permission of the publishers.

Water,’an integral component of all ecological and societal processes ‘is fast dwindling and is not only a grave concern for India but a widely discussed global issue of present times. ‘The Bengal delta’, wrote Kalyan Rudra of West Bengal Government ‘which was described as areas of excess water in the colonial documents now suffers from acute dearth of water during lean months.’ At a meeting of water activists and experts in December 2016 (reports Times of India dated Septemer 1, 2017) the country’s water resources were analysed and the verdict was chilling. Over 70% of the rivers’ conditions were critical, their water flows diminished, tributaries were dwindling or cut off pollution was rampant, ri9ver banks encroached, and catchment areas denuded of forest. Preservation, maintenance and use of water resources in the river-dominated deltaic domain of eastern India are,therefore, primordial concerns for people inhabiting the region.The natural resource of water in this part has always remained a driving force and a catalyst for its socio-economic, religious-cultural, ecological evolutionary processes throughout history. Complex multi-faceted interactions between water and human living may be observed when we delve deep inside the history of this region.Glimpses of such interactions can be obtained from the writings of many an eminent scholar of the past and present. But a comprehensive study discussing the ordinary 265many aspects of the impact of water resources on the life and living of the residents inhabiting this region is lacking. There are studies on irrigation etc. on the Ganges valley, north-western and western India, south India by Indian and non-Indian scholars. Even the writings of Dr.S.K. Mahapatra(2005), Dr. Ganeswar Nayak (2007) on Orissa canal system and water transport throw light on technological changes in canal irrigation and navigation system and its diverse impact upon Orissa’s peasant economy and society. But such works are lacking so far as Bengal during the colonial era is concerned. My present research work is a modest approach on ‘History of canals in Bengal’, mainly during the 19th c., almost a virgin field of study which has been discussed with an understanding of this region’s peoples’ many aspects of river-centric life and living during the period under review. It offers a fascinating study–why and how the Calcutta and Eastern canals, the Orissa canal system (Orissa at that time belonged to the province of Bengal) came into being; posed as insurance against recurring drought, flood and famine; improved the natural drainage system and opened up rural interiors. Those were the canals due to which new markets sprang upon its banks, new settlements were colonized, people spurred to new agricultural, economic and trading activities which became integral components in the country’s infrastructural modernization and in transforming agriculture, trade, economy, society and life of people. But those canals dwindled over time while competing with the railways and due to neglect in their proper upkeep by successive governments which resulted in the sordid present-day scenario of a moribund state affecting life, economy and environment of the region.The moot purport of this study is to make people at the helm of affairs aware about the potential of the water resources with which this region is endowed with, which will serve as a ready reckonrt with details I have collected from very wide range of study over the years. The following chapters are arranged to discuss the subject in detail–

I was registered in the Jadavpur University for Ph.D. which task I could not submit within the stipulated time. However,over years I went on collecting materials in addition to my regular college duties and University assignments with the intention to complete the work after I retire. My work is based on primary materials, including archival, government reports, contemporary or near-contemporary journals, Gazetteers, Survey- Settlement reports, writings of officials directly in-charge of canal administration as well as secondary sources, such as, books, journals and also availed link facility. I have followed the standard spellings in naming places, rivers, etc. I have kept the references with myself, any reader interested to be sure about the authenticity of any information may be satisfied if contacted to the author’s e-mail address. I never received any grant from any institute nor availed any leave from my college to get rid of my usual college and university assignments and devote the time to pursue my work.

Meanwhile, the Calcutta chapter of “The Calcutta Canals” was presented in a seminar organized jointly by the Birla Industrial and Technological Museum, Centre for Studies in Social Science and NISTADS. Subsequently it was published in “West Bengal”, a journal of the Government of West Bengal;and the Bengali version of which was included in a book named “Vishay Kolkata” published by National Library Workers’ Association in 1993. Most of the writings were complete long back and were lying idle inside my drawer when my elder daughter Miss Kaushikibrata Banerjee rather compelled me to complete the work and publish it. I am deeply indebted to her for her initiative and give time to oversee the work.But the real credit for publishing the book goes to Sri Arijit Saha who is almost like my son to whom I will remain ever grateful. The young hearts of ‘Doshor Publication’deserve my heart-felt thanks for kindly consenting to publish the work of a writer from nowhere. I wish them all success in life. I also extend my sincere thanks to “Amra Monbhasi” for the support and encouragement I received from them in publishing my work. In the cultural and literary arena they are doing commendable jobs and I am convinced that they have a very bright future. I am now 75 years of age and would remain ever grateful to those authorities if my work is  of any use to them in resuscitating the water resources in this part of our country. Any constructive suggestion  is welcome for future improvements to the book.

The Indian subcontinent, especially her eastern segment, has been endowed with ocean, and a maze of rivers, creeks, bils, backwaters, etc. which may be considered as the most important geo-physical feature of the area. These water bodies provided the ingress from and egress to the sea that formed routes for her inland ports and cities rich with various agricultural produce, quality handicrafts, etc. to build up commercial, colonial, missionary ties with the outside world and her polity, economy, trade, culture and society in general had been river-centric to a large extent. While rivers bore the main brunt of inland water-borne traffic, canals, constructed by the colonial Government in the 19th century, served as appendage to the main-line river traffic and both the systems were interdependent and intertwined.These canals were either used as means of transit or served both the purposes of navigation and irrigation.A historical survey of the origin and development of these canal projects, the commercial potency of the water resources that stimulated and provided ‘the alacrity and bustle of traffic’ and transformation in agricultural pursuits and the many matters of ’the interface between hydrology and human society’ at different geographic locations cannot be elaborated without an understanding of the influence of the river system on Bengal’s life and economy.

During the days gone by oceans, navigable rivers, and amiable climate largely determined the locale of human settlements, activities and conditions of life. Man had to constantly adjust himself with the ‘swings of the streams’. “Human map follows the hydrological map”- such goes the saying. The Nile, Tigris, Euphrates, Indus, Wang ho are considered mother rivers that spawned great civilizations of yonder days. Over time though man has learnt many ways to harness rivers to serve his  needs, he still faces the wrath of rivers’ fury, land-erosion or change in river-courses at times if they are left to dwindle or due to some natural calamity causing serious impediments to the natural drainage system creating manifold habitation problems. That provide the rationale why we should devote our all-out effort to revive, preserve and maintain the water bodies with which this region is endowed with.

The Ganges, Brahmaputra, Meghna, with numerous tributaries and distributaries created deltaic Bengal and the same fluvial action has been responsible for shifting of river-courses over time. Banks of major rivers once studded with great port towns, capital cities witnessed their gradual decline because of such shiftings of river- courses or due to competition with the railways or because the rivers became difficult to navigate due to negligence in their upkeep and the present-day scenario is-many of these rivers have changed courses, some disappeared from the surface altogether or ‘turned to trickle’ causing congestion of drainages, environmental pollution and various types of health hazards. As a consequence there have been gravitational shifts of settlements from river banks to either roads or railway tracks. A glimpse into Bengal’s past will reveal the kaleidoscope of such changes.

From the dawn of Bengal’s historical period she earned her name as a sea-faring nation. She had overseas trade relations with south-east Asian countries like Java, Sumatra, Siam (modern Thailand),etc.; far eastern countries of China, Japan; coastal ports of Orissa, Coromandel, Malabar, Gujarat; African coasts, Arab and other near eastern countries, Rome, Greece, Mediterranean countries, etc. According to Mahavamsa the Vanga King Vijayasimha conquered Lanka (modern Sri Lanka) in 544 B.C. and named it Sinhala. Some of the ancient dynasties of Bengal, Orissa and south India built up several colonies in many of the countries of south-east Asia. As a consequence the main texture of Bengal’s culture and society have never been insular but cosmopolitan, legacy of  which she proudly maintains  till date.

From earliest time important port cities emerged upon river banks like the town of Ganges mentioned by Periplus as the grand emporium for Bengal at no great distance from Calcutta. About the time of Lord Buddha, and possibly earlier, sea-going vessels used to be laden with merchandise of the Ganges plain from Benares. The next important commercial emporium was Pataliputra (modern Patna), located at the confluence of the Ganges and Son rivers which rose to prominence under the Mauryas and Guptas. During this period another important port was Champa on the Ganges in the Bhagalpur district. Kausambi was another port on the

End of this Sample Book.